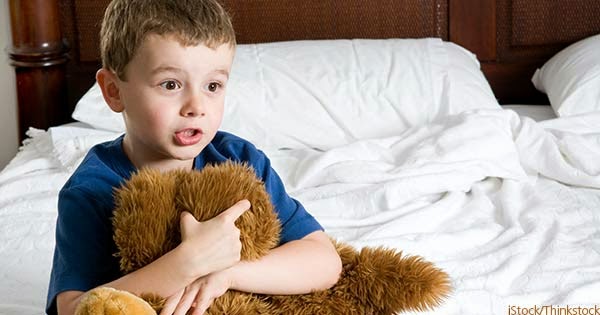 What do you do if your little one is waking during the night from a bad dream and refuses to go back to sleep? Or what if your little one refuses to go to sleep at bedtime because he has had bad dreams several nights in a row? And what if your child has been inconsolable upon waking at night but you aren’t sure if your child is waking due to a nightmare or a night terror? These are common questions parents have when responding to their little ones’ nighttime sleep needs.

As long as children are dreaming, they may have nightmares. At some point, all children do. Interestingly, even infants dream. According to one landmark study (Roffwarg et. al., 2006), newborns dream more than at any other time in a young person’s life. Nightmares , which are bad dreams, can happen at any point in a toddler’s or child’s life, especially if he has just experienced a traumatic event. Several studies have shown that children may have nightmares following surgery or tooth extraction or if they have been passengers in motor vehicle accidents. Nightmares can also begin during periods of developmental change, such as the period between 18 and 21 months and, again, right before a child’s third and fourth birthdays. These are periods of individuation, when a child may become more sensitive or emotional as he develops more independence.

Nightmares occur during REM (rapid eye movement) sleep cycles, typically during the final stages of sleep, later in the night. This makes nightmares different from night terrors, which typically occur in the first few hours of sleep (see below).

Nightmares are thought to be most common between the ages of 3 and 5 years old, but can begin as early as the first year of life. They can be an important way that young children express their fears, anxieties, feelings, and their day-to-day experiences. They are typically not a sign of emotional or psychological problems. Some children may become so fearful that they may protest going to sleep or sleeping in their beds at night.

What to do to help your child:

When to call your child’s doctor: 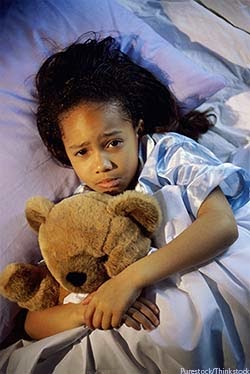 Night terrors, also called “confusional arousals,” commonly begin around ages 2 to 4 years. They are considered normal until age 6 and are seen in approximately 3% of children. There is often a family history of confusional arousals and night terrors, and they are most common in boys. They are often triggered by sleep deprivation or by a sudden change in the child’s schedule in the days preceding a vacation, end-of-school year, or visiting to relatives. They do not have a psychological basis. They can also be triggered by fever and illness, and research also shows they may be triggered by allergies. They are very different from nightmares. During a confusional arousal, children are not dreaming and typically will have no memory of the event following it. Once it is over, the child will usually go back to sleep without much problem. Night terrors occur in the transition period between deep non-REM sleep and a lighter sleep stage, when the child becomes stuck and is unable to completely emerge from slow-wave sleep. Night terrors typically occur within two hours of going to sleep.

Although night terrors are harmless, they can be very upsetting for parents who may be concerned that their children may hurt themselves. Your child may jolt awake, thrash his body, scream, or moan, but he will be unable to answer you or hear you. Your child’s eyes may be open or closed, and your child may look confused and may not recognize you. The duration of a night terror may be one to 30 minutes, with an average time of five to 10 minutes. During the night terror, you can prevent your child from injury, but do not try to wake him. Make soothing comments and hold your child, but do not shake or shout at your child in an attempt to wake him up. The night terror will pass, and he will fall right back to sleep.

What to do to help your child:

When to call your child’s doctor:

Angelique Millette, a pediatric sleep consultant, is a parent educator at Parents Place.