How and Why to Encourage Your Child’s Creativity

Parents and schools typically spend a tremendous amount of resources on academic readiness and performance, and skills in the areas that are thought to win kids plum jobs in the future, such as engineering and math.

But companies you’d least expect, like IBM and Google, are stating the importance of soft skills—teamwork, empathy, adaptability, and creativity—over the more concrete “hard skills” when they recruit and hire.

While we need programmers and coders, and especially need to encourage girls to excel in STEM subjects (science, technology, engineering and math) at the same rate we do boys, we may be emphasizing these hard skills at the expense of the soft skills that kids truly need to succeed.

How can we encourage creativity and the other soft skills today that lead to success tomorrow?

“Children are naturally curious and imaginative. Most don’t need prodding to engage in pretend play, which encourages empathy, cooperation, creativity and divergent thinking (the ability to envision multiple outcomes and solutions),” says Helen Hadani from the Center for Childhood Creativity in Sausalito. Encourage pretend play by providing dress-up clothes, building materials, and craft or other items and then largely getting out of the way and letting your child’s imagination unfold.

Pretend play inspires creativity and decision-making skills because it is open-ended: Kids make up their own rules and play objects, rather than having those things prescribed for them. Try to give your kids toys that allow them to play with them in more than one way. And don’t discount the box the toy comes in! An exhibit called Box City, at the Children’s Discovery Museum in San Jose, grew out of the realization that museum visitors were spending more time playing with empty boxes than they were in other exhibit areas. They drew on them, role-played in them, and created a whole town in boxes that normally wouldn’t be thought to have play value. Open-ended play encourages creativity by emphasizing process over product. There is no goal other than the play itself.

Many parents view unscheduled time as time that’s not being put to good use, but the opposite is actually true. Just as they need open-ended things to play with, kids need some open-ended time to make creative discoveries on their own. Boredom can lead to breakthroughs, self-discovery and experience in decision-making. Time can be a great gift in a busy world.

Encourage Kids to Play Outside

While outdoor play and recess are often treated as optional, studies confirm that they are key to the development of such important soft skills as self control, decision making, and planning, in addition to the obvious benefit of physical health. Kids who play outside, with minimal adult supervision, learn to cooperate with each other. Through pretend play and calculated risks, they learn to prioritize steps and make decisions. Natural playgrounds even reduce bullying, because they don’t favor the biggest and strongest kids in the way that traditional playgrounds and equipment can. 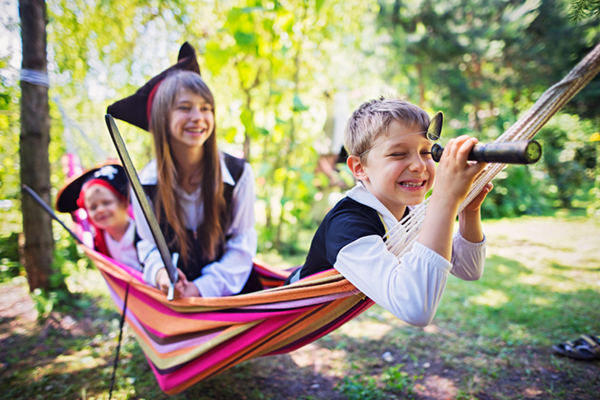 Play, drama and fiction help children imagine alternative possibilities and scenarios. When they do so, they’re engaging in divergent thinking (mentioned above). “The gift of play is that it helps us deal with the unexpected,” writes early childhood researcher Alison Gopnick. In conversation, try to ask your kids open-ended questions that have multiple possible answers. Challenge them to see different possibilities, and let them likewise challenge you. Christine Carter from the Greater Good Science Center suggests letting children who have solved a problem one way solve it a second way.

Of course, this one’s hard. Aren’t parents supposed to swoop in and rescue our kids from failure? Help with those science and history projects just a little? It turns out that the kids who don’t learn to accept and grow from failures when they’re young, have a harder time with responsibility, planning and resilience when they’re older. Here are tips from the Greater Good Science Center for overcoming fear of failure and developing self-compassion.

Here are some specific activities from the Bay Area Discovery Museum that inspire creativity:

And, remember those STEM subjects? Here are some ways to help your kids use math and engineering for creative problem-solving:

Read more about play and creativity from Parents Place:

Preparing for Kindergarten Too Early?

Schedules vs. Free Playtime: How to Find the Balance

Susan Sachs Lipman (Suz) is the author of Fed Up with Frenzy: Slow Parenting in a Fast-Moving World, which contains 300+ activities for family fun and grew out of her blog, Slow Family Online. Slow Parenting and the book were named a 2012 Top 10 Parenting Trend by TIME Magazine. Suz has written for the New York Times’ Motherlode blog, the Christian Science Monitor’s Modern Parenthood blog, and many others. She is a consultant for the Center for Children and Youth.

Covid Disrupted Family Life. How Should We Move Forward?

In her book, The Stolen Year: How COVID Changed Children’s Lives, and Where We Go Now, author and reporter Anya K...
CONTINUE READING

How to Create Family Holiday Traditions that Last

Family traditions can be especially impactful during the holiday season, as we all look for ways to connect with th...
CONTINUE READING

Problematic vs. Normal Anxiety―How to Know the Difference and How to Help By Dr. Sarita Patel

It’s no secret that childhood anxiety has been on the rise, and many parents are concerned about missing signs or...
CONTINUE READING