Home All Articles What Can We Learn From the SFGiants to Help Make Our Children More Resilient? 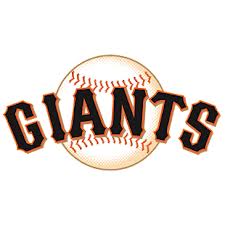 What Can We Learn From the SFGiants to Help Make Our Children More Resilient?

In 2010, the San Francisco Giants were 6 ½ games back in their division in August. This year, they were neck and neck with the Dodgers mid-season, when the Dodgers made multiple blockbuster trades. Next thing you know, one of the Giants’ best players gets suspended for the remainder of the season. Somehow, some way, both reasons, ended in champagne celebrations and ticker-tape parades. How were the Giants able to overcome such adversity, stay united, and ultimately attain success?
The Giants did what any group of people does when they encounter a crisis, they looked at their leader. Bruce Bochy manages with a calm, honest confidence. At a lifetime achievement acceptance speech in 2011, he discusses the keys to a leader building resiliency. We all want our children to be resilient and learn to handle life’s inevitable challenges with grace and determination. To that end, there’s much we can learn from Bruce Bochy and the World Champion San Francisco Giants.
“Resiliency comes from being positive but also not taking yourself so seriously.” That’s straight from Bochy’s mouth, but I can’t think of two better pieces of advice from handling today’s stressed-out perfection-craving parenting arena. The “stay positive” aspect seems obvious enough if you think about it. We’re leaders and our children are looking to us to set the tone each day. So easy to get frustrated and defeated but if we stay that way most of the time, it’s only natural it would trickle down to our children. If we want them to be resilient, and learn to handle life’s inevitable bumps and bruises, the single best thing we can do, is model a positive outlook. This is obviously the hardest and yet most crucial in times of crisis.
The segues perfectly into the “not take yourself so seriously” piece to this puzzle. What’s a crisis and what’s not? Seems to me, a big component to that dynamic is what we as leaders make of the whole thing. Our children will follow our lead. The best we can do is stay positive and not take ourselves and the whole parenting schtick too seriously. Like Bochy, convey your belief in your children with calm, consistent, confidence. He concludes, “The teams that are there in the end are the most positive.” 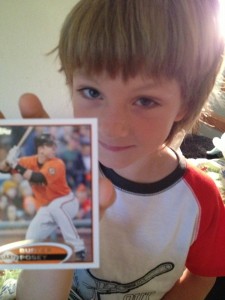 Model and Teach the Importance of Learning from Mistakes— Mistakes, challenges, adversity, and failure are all inevitable whether you’re talking about a 162 game season, your child’s academic performance, or toilet training. Again so important to keep in mind our children learn from the behavior we model. It’s up to us, to accept these tests, help our children decipher the lessons, and impart them in a non-judgmental, supportive manner. It starts with our attitude. Take it from Bochy, “If a player makes a mistake, I want him to learn from it. I want him to move on.” Sergio Romo, the Giants’closer, had this to say of Bochy: “He’s not judgmental at all. He had a lot of patience with us this season, which we needed.”
“Focus Forward” — Another phrase straight from the horse’s mouth (Bochy). Once we’ve addressed the issue and what was learned, it’s up to us as leaders to move the attention and energy toward future endeavors and improvements. We can do that with two simple words: “next time.” Like Bochy, we don’t want to dwell on the negative or the failure: “We want them in the here and now.”
Stay Supportive — So much of a parent’s role is tied into discouraging certain behaviors. It’s easy to slip into that mode on a daily basis or take things personally. We need to recognize that our children need our encouragement and belief. As Bochy explains, “when you see someone having a hard time, help them out of it.”
Enjoy Each Other — OK, this one is more from Hunter Pence and his now infamous speech before game three of the Reds series this year. As he pleaded to his teammates to “play for each other” and confessed, “I need one more day with you guys,” the unity and resilience that Bochy had instilled in the team, through his calm, honest leadership, was never so clear. It’s what enables them to win two championships. Leaders create tones of enjoyment or frustration; either way, those tones permeate. “It starts at the top,” Pence explains. “There’s a unique, relaxed and encouraging feeling that starts with Bochy. He’s always, calm, and that keeps us calm.” No doubt us parents can learn from these guys and strive to be giants in our own homes. As I say in the closing line of my book, the memories and relationship we create together with our children, is our championship. 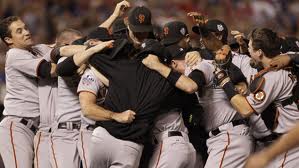